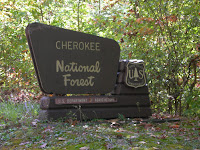 If you have followed my blog for a few years, awhile back I posted about where my home country is. Yesterday Kim and I took a little trip up to the Cherokee National Forest and it reminded me again that I am an east Tennessee boy. We loved our time in the middle of the state and Nashville was great, but the topography and culture of the southeast of the state is a place I love. It was a beautiful drive on a gorgeous day. We first went up by Parksville Lake and up on Chilhowee Mountain (a friend from Alaska once told me that what we have here are not really mountains, 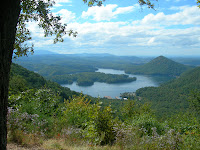 but thats ok). The play of the cloud's shadow across the valley below was awesome, and we watched the shadows move across as we ate lunch at an overlook. After lunch we headed off the mountain and up highway 30, turning north from the lake. though there was not as much color as other years due to the dry season, it was still a great driv 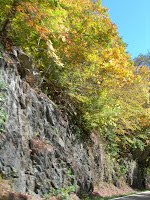 e. The overhanging foilage along the roadway was lovely. When we lived here before we were often in the National Forest, and this was not our first foray since we have been back. But each week something seems to confirm that we are in the right place in this season of our lives. Things like passing over the Tennessee River towards evening, hanging out with family and friends, Jordan's Barbecue, and a whole host of other stuff point to how this is home. Home is not a place you stay forever, but it a wonderful place to be right now.
3 Comments

By Robb
I was blessed to be able to attend the state minister's meeting today. John Wesley said it was a holy time when the ministers meet in conference, and I was reminded of that today. It was a good day of fellowship and administration. certainly business is done in these meetings, but I enjoyed much more the opportunity to talk with friends and fellow ministers.

To no longer be a pastor, it was an oddly affirming day. I feel at the end of the day more convinced that my family and I are where we are meant to be in this season of our lives. I honor and respect my fellow ministers who are in the pastorate currently and was happy to be able to be with some them today.
0 Comment

The Word of Reconcilation

Category: Hope , spirituality , theological reflection By Robb
I have been thinking about the word/concept of reconciliation of late. Really it is more like I have been bombarded with it than contemplating it, seeing its evolution in others as well as in my own relationships. One of my mentors long ago when we were faced with a crisis where brothers and sisters were on both sides of the debate asked whether we would be a community of faith or a community of truth. The tension between these poles can be quite taunt at times, and that tension sometimes causes things to snap.
Another mentor once told me its all about relationships. It is all about relationships. This is what holiness is. But so often holiness gets plugged into an equation something like this - right with God= right doctrine, without any regard to "right with Brothers/sisters." The world is populated with right people who are living lonely existences. The world is also populated with people who don't have all the right answers and maybe even some wrong ones who are living in solidarity with God precisely because they are in solidarity with those whom they commune with.
Don't get me wrong- right doctrine is very important. We must know what we believe. Yet one thing I read early this week is that Jesus did not have theology of healing; rather he healed people. As important it is to think things through and to work out our salvation with fear and trembling (intellectually) we must also work out our salvation in other ways, in ways that reflect a catholic spirit as Wesley encouraged. We may not all think alike, but we can love alike is how he once put it, or something to that effect. How often we isolate ourselves from Brothers and Sisters who have gifts to give to us all because we do not think alike. R. G. Spurling was also concerned about how doctrine built walls between spiritual brothers and sisters. The lost link in the church was Christ's law of love. Since Nicea, according to Spurling, the church has become more and more concerned about right and wrong, who's in and out, then about showing love one to another. The Law of Love established by Christ had been supplanted with creeds and doctrines of men. I am a strong believer in doctrine, but it is hard to argue with the divisive nature the church has taken on in our day.
2 Comments